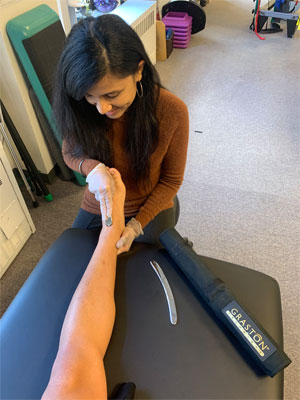 The most common injury in the ankle is the ankle sprain. It is typically an inversion sprain where the toes roll down and toward the inside and the person falls over sideways. An ankle sprain refers to tears in the ligament.

The ankle joint is the smallest of the three main joints of the leg. The ankle is a mortise joint with the large talar bone as its base, and the tibia and fibula above and to the side of it. It is a fairly mobile joint with support from many surrounding ligaments. The inside of the joint has greater support with 5 ligaments. The outside of the joint has lesser with only 3, leading to more injury in this area.

The technique demonstrated is an anterior posterior joint mobilization of the fibula on the talus. The function of this is to push the fibular bone back to restore full range of motion in the joint. After an inversion sprain, the fibula gets pulled forward resulting in a malalignment of the joint as well as a restriction of dorsiflexion (pulling the toes up toward the head) because the tibia and fibula cannot move up and out during this motion.