Heal Yourself With the Best!

Injuries to the knee include meniscal tears, ligament tears, arthritis and traumatic injuries. After injury, the position of rest and minimal pain is a slight bend in the knee, about 20 degrees of flexion. The knee can also be placed in an immobilization brace depending on the injury which can lead to significant difficulty in motion after removal.

The knee joint is another hinge joint, similar to the elbow joint. The knee consists of the femur and the tibia and fibula bones. The tibia is the larger and more medial bone (the shin bone) and the fibula is the thinner, longer and more lateral bone on the outside of the lower leg. 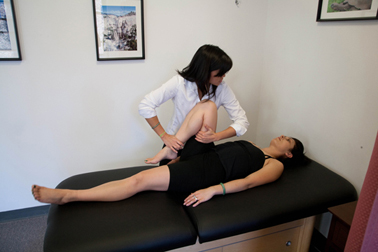 The knee incurs many stresses in that it can flex, or bend deeply and can torque, or pivot. The are two cartilaginous structures within the joint called menisci. Each meniscus is a circular structure, one on the inside and one on the outside of the knee joint. The function of the menisci are to absorb shock, reduce friction and allow for greater space between the bones of the knee. There are also many ligaments within and around the knee joint, called cruciate and collateral ligaments, respectively. Ligaments are dense, tensile-withstanding structures much like thick, difficult to stretch rubber bands. The cruciate ligaments inside the joint are able to withstand more rotational than translatory forces. The collateral ligaments outside the joints are able to withstand more translatory than rotational forces. All structures work synergistically to prevent excessive motion at the knee.